"The Design, Fabrication, and Performance of a Large-Area, HighEfficiency Cosmic Ray Veto Detector for the Mu2e Experiment at Fermilab "

The Muon-to-Electron-Conversion (Mu2e) Experiment is a high-precision, intensity-frontier experiment being developed at Fermilab which will search for coherent, neutrino-less muon to electron conversion in the presence of an atomic nucleus. Such a process would exhibit charged lepton flavor violation (CLFV), which has not yet been observed. Continuing the search for CLFV, Mu2e will improve the sensitivity by four orders of magnitude over the present limits. In the search for beyond the standard model (BSM) physics, Mu2e is uniquely sensitive to a wide range of models by indirectly probing mass scales up to the energy scale of 104 TeV. While muon-to-electron-conversion is permissible through neutrino oscillations in an extension of the standard model, the rate is extremely low at about one event in 1054. By design, the background for the experiment will be well-understood and kept at a sub-event level, which results in the observation of muon-to-electron conversion as direct confirmation of BSM physics. The largest background comes from processes initiated by cosmic-ray muons, which will produce approximately one CLFV-like event per day. In order to reduce this rate to less than one event over the lifetime of the experiment a large and highly efficient cosmic ray veto (CRV) detector is needed. The CRV will cover the experimental apparatus with an area of approximately 330 m2. The overall efficiency must be no les than 99.99%, a requirement that must be maintained in the presence of intense backgrounds produced by proton and muon beams. The detector employs long scintillator strips with embedded wavelength shifting fibers, read out using silicon photomultipliers. Key features of the talk involve the design, fabrication, and performance of the CRV, along with an overview of the Mu2e experiment.

The Compact Muon Solenoid (CMS) detector at the CERN Large Hadron Collider (LHC) is undergoing an extensive Phase II upgrade program to prepare for the challenging conditions of the High-Luminosity LHC (HL-LHC). In particular, a new timing layer will measure minimum ionizing particles (MIPs) with a time resolution of ~30ps and hermetic coverage up to a pseudo-rapidity of |η|=3. This MIP Timing Detector (MTD) will consist of a central barrel region based on LYSO:Ce crystals read out with SiPMs and two end-caps instrumented with radiation-tolerant Low Gain Avalanche Diodes. The precision time information from the MTD will reduce the effects of the high levels of pile-up expected at the HL-LHC and will bring new and unique capabilities to the CMS detector. The time information assigned to each track will enable the use of 4D reconstruction algorithms and will further discriminate interaction vertices within the same bunch crossing to recover the track purity of vertices in current LHC conditions.  We present motivations for precision timing at the HL-LHC and the ongoing MTD R&D targeting enhanced timing performance and radiation tolerance for the barrel layer components.  We will also describe the progress of our search for new physics in final states with two photons and missing transverse energy using the full Run2 dataset.

The origin and observed abundance of Dark Matter in the Universe can be explained elegantly by the thermal freeze-out mechanism, leading to a preferred mass range of the Dark Matter particles in the MeV-TeV region. The GeV-TeV mass range is being explored intensely by the variety of experiments searching for Weakly Interacting Massive Particles. The sub-GeV region, however, in which the masses of most of the building blocks of stable matter lie, is hardly being tested experimentally to date.
This mass range occurs naturally in Hidden Sector Dark Matter models. The Light Dark Matter eXperiment (LDMX) is a planned electron-beam fixed-target experiment, that has unique potential to conclusively test models for such light Dark Matter in the MeV to GeV range. This presentation will give an overview of the theoretical motivation, the main experimental challenges and how they are addressed as well as projected sensitivities. 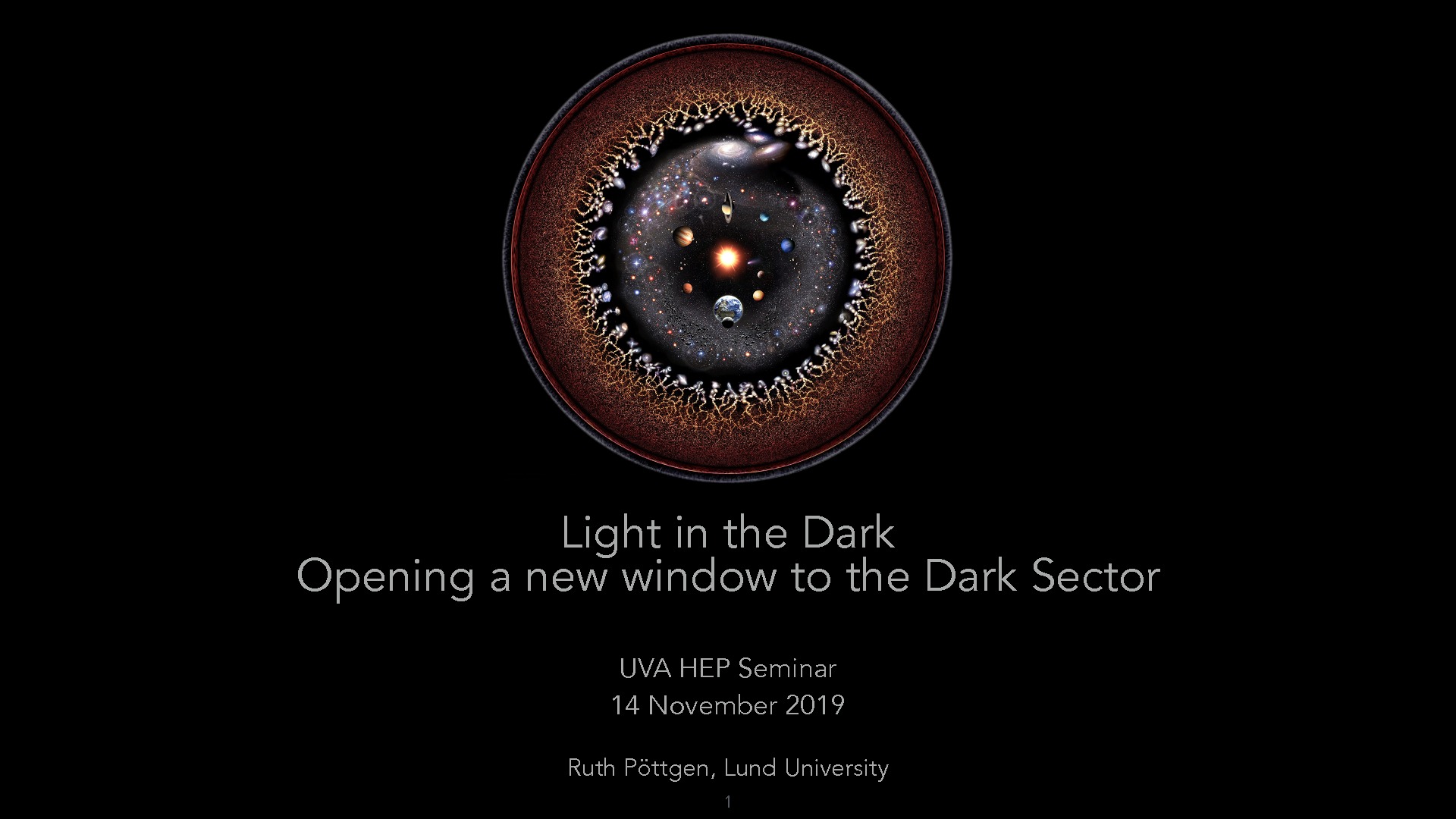 "Searching for Dark Matter from the Lowest to the Highest Energies "

Dark Matter (DM) is a long standing puzzle in fundamental physics and goal of a diverse research program.  In underground experiments we search for DM directly using lowest possible energy thresholds, at collider we seek to produce dark matter at the very highest energies, and with telescopes we look for telltale signatures in the cosmos. All these detection methods probe different parts of the possible parameter space. I will highlight status of existing and upcoming experiments including new direct detection experiments with world leading sensitivities to start data taking in early 2020. Finally  we’ll discuss how to connect these approaches and how an interdisciplinary program bridging experimental frontiers can provide the most stringent constraints.

We detail the application of image recognition to jet tagging in CMS. The method is based on the CNN top tagging optimization seen in arXiv:1803.00107v1 and evolved to include additional color information, b tagging, and an adaptive zoom.  Additionally, we demonstrate how this jet tagging network can be decorrelated from the mass of the progenitor jet, which allows for the possibility of tagging BSM objects. We study the impact on top tagging sensitivity, the data-simulation agreement, and the versatility of the network to accept more exotic signatures.  Finally, we describe the application to the latest BSM physics searches.

The following theorem is proven: axisymmetric, stationary solutions of the Einstein field equations formed from classical gravitational collapse of matter obeying the null energy condition, that are everywhere smooth and ultracompact (i.e., they have a  light ring, a.k.a. circular photon orbit) must have at least two light rings, and one of them is stable. It has been argued that stable light rings generally lead to nonlinear spacetime instabilities. Thus this result implies that smooth, physically and dynamically reasonable ultracompact objects are not viable as observational alternatives to black holes whenever these instabilities occur on astrophysically short time scales. The proof of the theorem has two parts: (i) We show that light rings always come in pairs, one being a saddle point and the other a local extremum of an effective potential. This result follows from a topological argument based on the Brouwer degree of a continuous map, with no assumptions on the spacetime dynamics, and hence it is applicable to any metric gravity theory where photons follow null geodesics. (ii) Assuming Einstein’s equations, we show that the extremum is a local minimum of the potential (i.e., a stable light ring) if the energy-momentum tensor satisfies the null energy condition.

"The Exterior Spacetime of Relativistic Stars in Quadratic Gravity"

General Relativity (GR) has been the cornerstone of gravitational physics for a century. Over this time, numerous predictions and tests have strengthened the belief in GR as the foremost theory when discussing gravity. However, GR cannot in its present form be reconciled with either quantum mechanics, or many cosmological observations such as galactic rotation curves or the accelerated expansion of the universe. In an attempt to rectify these shortcomings, modified theories of gravity have been proposed. In this talk, I will present one of these theories and discuss my work in attempting to test its validity through the development of an exterior spacetime (metric) for a neutron star. From this, we expect to be able to develop a pulse profile which can be used, in conjunction with observations made of the x-ray flux of radiating neutron stars, to place constraints on the theory.

Understanding the nature of dark matter is a central objective of modern science, and recent theoretical developments have highlighted the importance of extending current searches over a wider range of masses. The Light Dark Matter eXperiment (LDMX) has been propose to search for light dark matter and sub-GeV New Physics in fixed-target electron-nucleus collisions with unprecedented sensitivity. The experiment is based on a missing momentum technique, in which dark matter is emitted by electrons scattering in a thin target, resulting in large missing momentum and energy in the detector. This talk will discuss the motivation for light dark matter and describe the LDMX concept and its expected performance. 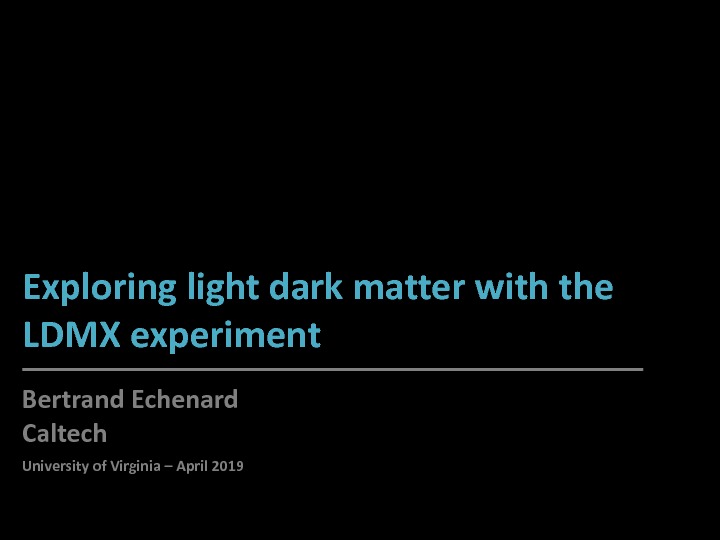 The J-PARC TREK/E36 experiment with a stopped K+ beam is designed to provide a more precise measurement of the branching ratio RK = Γ(K+ → e+ν)/Γ(K+ → µ+ν) than previous in-ﬂight K+ decay experiments. RK is very precisely predicted by the Standard Model (SM) with an uncertainty of 4×10−4 and any deviation from this prediction would very clearly indicate the existence of new physics beyond the SM. Additionally, the experiment is searching for dark photons/light neutral bosons (A0), which could be associated with dark matter or explain the gµ-2 anomaly and the proton radius puzzle. In the experiment, a K+ beam was stopped by a scintillating ﬁber target, and charged decay products were momentum analyzed and tracked by a 12-sector superconducting toroidal magnetic spectrometer and multi-wire proportional chambers (MWPCs) combined with a photon calorimeter with a large solid angle (75% of 4π) and 3 diﬀerent particle identiﬁcation systems. In this talk, the status of the RK and A0 analyses is presented, and the MWPC calibration and tracking by a Kalman ﬁlter are reported. This work has been supported by awards DE-SC0003884 and DE-SC0013941 in U.S., NSERC in Canada, and Kaken-hi in Japan.

"Neutrino Physics from the PROSPECT Experiment"

PROSPECT, the Precision Oscillation and Spectrum Experiment, is a reactor antineutrino experiment designed to search for eV-scale sterile neutrinos and measure the spectrum of antineutrinos from highly-enriched 235U at the High Flux Isotope Reactor (HFIR). PROSPECT uses a 4-ton, segmented 6Li-doped liquid scintillator detector to make a high-resolution measurement of the prompt energy spectrum from inverse beta decay on protons. An optical and radioactive source calibration system integrated into the active detector volume is used to characterize the optical and energy response of all detector segments. I will discuss the calibration and characterization of the PROSPECT detector and report on PROSPECT’s first measurement of the energy spectrum associated with reactor antineutrinos.

Upgrades of the M2 beam line resulting in high intensity RF-separated
anti-proton- and kaon-beams would greatly expand the horizon of experimental
possibilities at CERN: hadron spectroscopy with kaon beam, studies
of transverse momentum dependent quark structure for protons, pions and
kaons, precise studies of nuclear effects and for the first time measurements
of kaon quark—gluon substructure.

To add a speaker, send an email to ecd3m@Virginia.EDU Include the seminar type (e.g. High Energy Physics Seminars), date, name of the speaker, title of talk, and an abstract (if available). [Please send a copy of the email to phys-speakers@Virginia.EDU.]