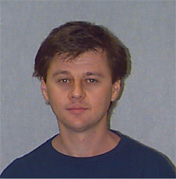 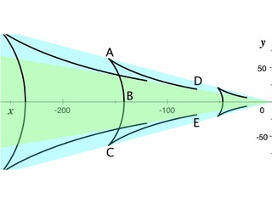 The wake behind a boat and the ripples caused by rocks in a stream are both due to the relative motion of a fluid and an obstacle,  which gives rise to wave patterns on the surface.   A recent Physical Review Letter "Kelvin-Mach wake in a two-dimensional Fermi sea" explores how charged impurities can cause similar effect of uneven currents on a conducting surface such as a graphene sheet.   The wake pattern is different from the familiar cases because the relationship between surface wave speed and wavelength is different, with the result that both the Mach "sonic boom" wake (whose opening angle depends on the speed of the moving object) and the Kelvin wake behind a boat (whose opening angle is independent of the speed of the boat) can occur as limiting cases.   The diagram shows an example of a wake pattern (the lines represent wave crests, the blue and green shaded regions are Kelvin- and Mach-like, respectively).  The understanding of this effect could be important in the engineering of electronic devices in cases where the scattering of electrons is small, so that their flow is described by a kind of hydrodynamics.