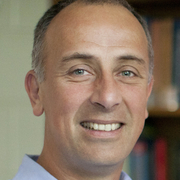 Olivier Pfister, a professor of physics in the University of Virginia's College of Arts & Sciences, has just published findings in the journal Physical Review Letters demonstrating a breakthrough in the creation of massive numbers of entangled qubits, more precisely a multilevel variant thereof called Qmodes.

Entanglement dwells outside our day-to-day experience; imagine that two people, each tossing a coin on their own and keeping a record of the results, compared this data after a few coin tosses and found that they always had identical outcomes, even though each result, heads or tails, would still occur randomly from one toss to the next. Such correlations are now routinely observed between quantum systems in physics labs and form the operating core of a quantum computing processor.

Pfister and researchers in his lab used sophisticated lasers to engineer 15 groups of four entangled Qmodes each, for a total of 60 measurable Qmodes, the most ever created. They believe they may have created as many as 150 groups, or 600 Qmodes, but could measure only 60 with the techniques they used.

For the full story, see:
http://www.virginia.edu/uvatoday/newsRelease.php?id=15525