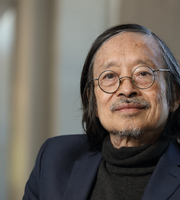 A recent article in Nature reports on results from the MoEDAL collaboration providing a lower mass limit for finite-size magnetic monopoles. P.Q. Hung is a member of the collaboration.
The discovery of an exotic particle carrying a magnetic charge - the so-called magnetic monopole - would have a profound impact on our understanding of why electric charges observed in nature only come in discrete values (charge quantization). Dirac was the first to propose an explanation for such a quantization by postulating the existence of a point-like, structureless magnetic monopole with an arbitrary mass, which also renders Maxwell’s equations symmetric upon the interchange between electricity and magnetism. There are however models in which magnetic monopoles have a finite size or, in other words, a composite particle. In addition, these models predict magnetic monopole masses which are in the energy range of current particle accelerators and, as a result, could be produced and detected. One of such models was proposed by P. Q. Hung (ref. 23 in the Nature article), Topologically stable, finite-energy electroweak-scale monopoles, Nucl.Phys.B 962 (2021) 115278; and John Ellis, P. Q. Hung and Nick E. Mavromatos, An electroweak monopole, Dirac quantization and the weak mixing angle, Nucl.Phys.B 969 (2021) 115468.
Searches for Dirac monopoles in accelerators were hampered by the fact that magnetic monopoles interact very strongly with normal matter and this prohibits a meaningful estimate of the production rate of such particles. Earlier searches for ”low mass”, finite-size magnetic monopoles relied on processes involving proton-proton collisions which, unfortunately, highly suppress their production. The novel approach by the MoEDAL experiment (of which P. Q. Hung is a member), described in the Nature particle, is to use heavy-ion collisions, such as Pb on Pb, to look for magnetic monopoles. In such heavy-ion collisions, an extraordinary strong magnetic field (more than four orders of magnitude stronger than the strongest known magnetic field present on magnestars) is created and can produce a pair of monopole-anti-monopole via the so-called Schwinger mechanism (originally proposed for the creation of a pair of electron-positron in the presence of a strong electric field), taking advantage of the duality between the electric and magnetic fields. The finite size and strong couplings of magnetic monopoles in the approach used by the MoEDAL collaboration enhance the production rate which can now be computed much more reliably and non-perturbatively, setting an exclusion lower limit of 75 GeV for the mass of a magnetic monopole. The present search by the MoEDAL collaboration is the first to have sensitivity to composite magnetic monopole at a collider which, in this case, is the Large Hadron Collider (LHC) situated in Geneva, Switzerland.