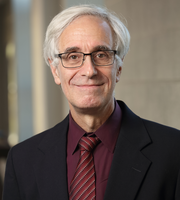 "Professor Lou," as he is called on TV, is science central on a feature segment called "Forces of Hockey," which is produced by the Capitals and aired on the team's associated cable networks, on the NHL Network, and shown during breaks between play at Caps games.

The show, now in its fifth season, has won three regional Emmy Awards for "Outstanding Sports Program/Series," the most recent this spring.

"I'm probably the only professor just about anywhere who has won three Emmys," said Bloomfield, who sometimes jokes that he's not an actor, "I just play one on TV."