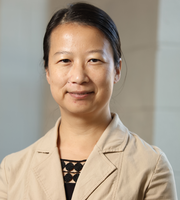 Xiaochao Zheng was quoted in a Quantamagazine article about the ongoing research into the internal structure of the proton.

Proof that the proton contains multitudes came from the Stanford Linear Accelerator Center (SLAC) in 1967. In earlier experiments, researchers had pelted it with electrons and watched them ricochet off like billiard balls. But SLAC could hurl electrons more forcefully, and researchers saw that they bounced back differently. The electrons were hitting the proton hard enough to shatter it — a process called deep inelastic scattering — and were rebounding from point-like shards of the proton called quarks. “That was the first evidence that quarks actually exist,” said Xiaochao Zheng, a physicist at the University of Virginia.